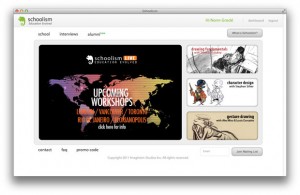 First off what is Schoolism? Schoolism is an online school that teaches classes for artists. The classes are taught by working professionals through out the 9 to 14 weeks course (depending on the classes). They offer a self taught version for around 500 dollars and a critiqued session course for 1000 dollars. The classes are pre-recorded with a new lecture activated every week. Each week there is an assignment, which is due the following week. When you complete the weekly homework, if you take the critiqued session, you can upload to the Schoolism site for grading. With the critiqued Session the instructor draws or paints over the submitted work giving you a personalized critique.

The most asked question I see on line is “Was it worth the price?” All and all I found the course very helpful and would say yes but let me tell you why. The course I took was Character Design (critiqued session) with Stephen Silver. Over the nine week class, he shared with me his techniques for producing characters. Starting with his influences, responsibilities of Character Designers, silhouettes, design principles, turnarounds, and some secrets of how to design characters for animation, feature films, and the video game industry.

I’ve watched a lot of videos, DVDs and online tutorials on character design and none of them have come close to the experience I had in Stephen’s class. Most of the other videos try to explain character design in one to two hours. Where a single week in this course was one to two hours by its self. He started with his influences and artists that inspired him as well as what the basics of character design are. Week two was getting the fundamentals down. He showed us drawing exercises he uses that keep his drawings fresh by playing with shape variation. Week three was about construction and explaining the value of drawing through your images. Interlaced within each of these weekly courses that showed us the fundamentals Silver was also working on his own three characters. Walking us through his thought process of how he creates each one. These examples were interspersed throughout each of the nine week lessons. In the subsequent weeks he then talked about facial features cleaning up lines and how to do a good character turn around. The whole time refining his three character designs. The final lesson was on the business side of art, being a professional and setting up a successful portfolio.

Our main homework assignment over the nine weeks was to redesign the characters of Dr. Jekyll and Mr. Hyde for today’s audience. My interpretation of this was Dr. Jekyll is a nerdy computer programmer that in his spare time plays online video games and his online persona in these games is the Hyde side. Stephen’s feed back to my work was great, but the ability to watch previous critiques of old and current classmates was just as helpful. In all the feedback videos Stephen draws or paints over the submitted work while commenting on what he would have done differently and ways to improve it. 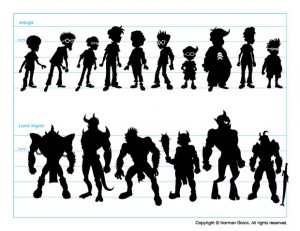 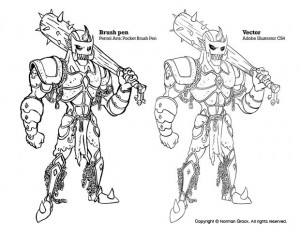 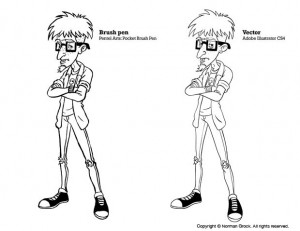 My only complaint with this class is I guess I just wanted more. In our homework assignments you were supposed to design Dr. Jekyll and Mr. Hyde but we only ended up refining one of the characters. It would have been nice to do both sides of that duo and get Stephen’s feedback. I felt the pacing was a little slow in one or two weeks where we could’ve filled in with working on the other side of this character. Maybe because this was a class for all levels he put in a few weeks where people could catch up, but for me I wanted to get all I could out of this experience.

I feel that this is a very good service that Schoolism is offering to artists. Is it worth the 1000 dollars for the course? I would say yes, but nevertheless it is a lot of money. They do offer the self-taught version with no critique for around 500 dollars. I have not experienced that so I can’t really speak to it but like all schooling, you get out what you put in. With that said I worked really hard at this class and subsequently I feel I got a lot out of it.

previousBook Report - Avatar: The Last Airbender (The Art of the Animated Series)