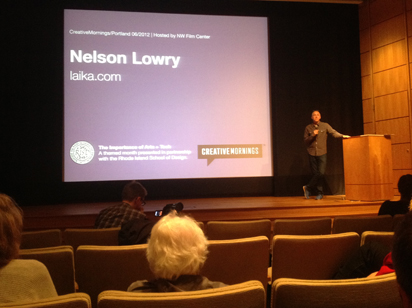 This past Friday I attended my first CreativeMornings lecture here in Portland, Oregon at the Portland Art Museum. CreativeMornings is a free monthly lecture series for creative people. Oh by the way, they serve free breakfast, donuts!

The lecture I attended was by Nelson Lowory who was the winner of the National Society of Film Critics Award for Best Production Design for his work on Fantastic Mr. Fox. Some of his other stop-motion works include Corpse Bride (Art Director), Fred Claus (Digital Effects Artist) and Danny Boyle’s Sunshine (Visual Effects Matte Artist). Just to name a few. Mr. Lowory talked about how the film industry has changed with the invention of the computer and 3D printing. The first Technology piece that changed the way he worked was PhotoShop. He then moved to 3D programs, but with all of these innovations he still enjoys making his sets out of paper or what ever other materials he has laying around. Even when 3D printers came around he would still start with paper elements, just to get the layouts right then as the 3D printed models were completed he would replace the paper version. Sometimes the paper mockup would even make it into the final scene, as in the commercial he worked on for the Sony Xperia where Lowory used old cardboard wine boxes as details in the background. Here is a link to the Sony Xperia TV ad, Made of Imagination. Nelson compared the sets he builds to his love of building with legos as a child. We all had something as children that inspired us to create. 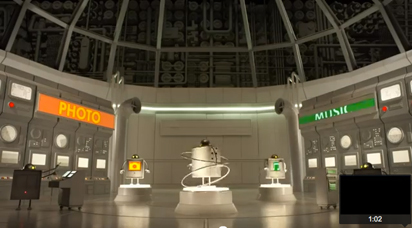 If you’re interested in attending a CreaviteMornings meeting, here are some of the locations they are currently located in. Check out their website, as they are always adding more cities. Mr. Lowory had a lot of knowledge and insight to pass on and I can’t wait to find out what the next lecture will be about.

Did you know that for the movie Coraline the movie studio Laika created a 3d printed face for every mouth movement. The production of ParaNorman has printed over 30,000 faces. In comparison, Laika’s last stop motion movie, Coraline, only used about 12,000. Nelson showed us photos of Laika’s facial expression library and how they store them. If you would like to know more about how Laika uses 3D Color printers. Here is a good article I found.